What is low-code? Low-code is a way to design and develop software applications fast and with minimal hand-coding. It enables skilled people to deliver value more quickly and more reliably. Using visual modeling in a graphical interface to assemble and configure applications, developers skip all the infrastructure and re-implementation of patterns that can bog them down and go straight to the unique 10% of an application. 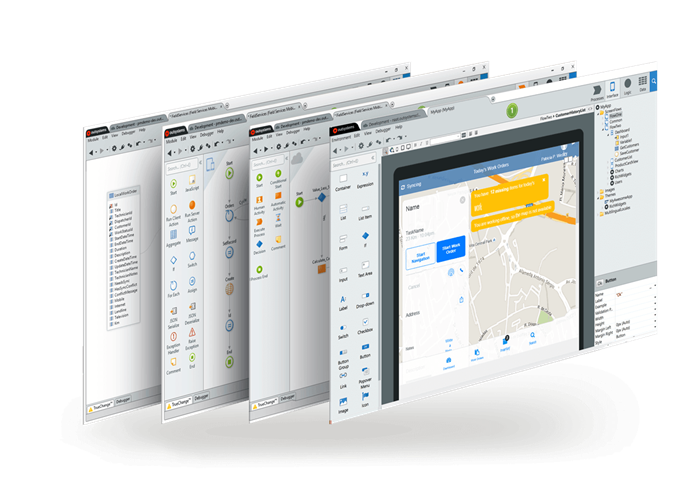 Low-code is analogous to manufacturing cars in some respects: most of what was once done by hand is now automated. The machines involved in the automation don’t decide what the car looks like, but they do accelerate the assembly and delivery process.

Low-code is to software what assembly lines are to the auto industry: both automate manual tasks that are difficult and time-consuming to free up people to do things that are much more important.

So, is there one answer to “what is low-code?”

No Really, What Is Low-code?

Okay, time to get away from analogies and down to the business of really answering “what is low-code?” In the software world, we rely on libraries, APIs and third-party infrastructure so that we can focus on delivering the unique bit of value that wouldn’t otherwise exist. But we still get bogged down.

Here’s what a typical low-code development platform looks like:

Beyond those basics, no two low-code tools are exactly alike. Some are quite limited and more akin to a visual database front-end, like FoxPro in the 90s. Some focus on niche business needs, like case management. Others have adopted the low-code term to describe a purpose-built tool that has little to do with actual application development.

Others, such as OutSystems, give you everything you need to create modern, cross-platform enterprise mobile and web applications with capabilities that complement existing team structures.

Fundamentally, building software with low-code is the same as building software any other way. Unless you’re writing everything from scratch in machine code—and, no, assembly language doesn’t count—then you’re already taking shortcuts built on the work of others.

With low-code, it’s all about the things you don’t have to do. Rather than hand-coding yet another user management system, dealing with the idiosyncrasies of the latest programming framework, or writing ten tests before a single line of your app’s code, you get straight to creating something new and valuable. Why start new when these problems have already been solved and the patterns are well understood?

The Traditional Application Development Process – Whether you’re working with .NET MVC, Spring Boot, or Ruby on Rails, you (and your team) go through roughly the same steps:

The Low-Code Development Process – With low-code it would look more like this:

Seven steps instead of sixteen.

Low-code understands that most of the time spent hand-writing code in web and mobile apps is pretty much wheel spinning. There’s no need to tread the same path each time we start a new project. Low-code lets us create applications visually using battle-tested fundamentals. Our focus becomes delivering something valuable to the world.

Low-code Is About Getting More Done

Ultimately, low-code is a way for developers to get more done. With low-code, you spend more time creating and building and less time on repetitive work. Sure, it’s fun to learn the latest faddish JavaScript framework or play with a cutting-edge NoSQL data store, but while you’re spending time debugging unfamiliar code, your competitor has an MVP in front of customers.

Low-code isn’t about reducing the value of developers. Low-code lets teams of developers produce more value more quickly while drawing on their understanding of how to create and maintain high-quality web and mobile applications.

You can try low-code for yourself with OutSystems. Get started for free by following our tutorials to build web and cross-platform mobile apps in a fraction of the time you’re used to. You’ll also be able to help out the next person who asks, “What is low-code?”

We use cookies on our website to give you the most relevant experience by remembering your preferences and repeat visits. By clicking “Accept All”, you consent to the use of ALL the cookies. However, you may visit "Cookie Settings" to provide a controlled consent.
Cookie SettingsAccept All
Manage consent

This website uses cookies to improve your experience while you navigate through the website. Out of these, the cookies that are categorized as necessary are stored on your browser as they are essential for the working of basic functionalities of the website. We also use third-party cookies that help us analyze and understand how you use this website. These cookies will be stored in your browser only with your consent. You also have the option to opt-out of these cookies. But opting out of some of these cookies may affect your browsing experience.
Necessary Always Enabled
Necessary cookies are absolutely essential for the website to function properly. These cookies ensure basic functionalities and security features of the website, anonymously.
Functional
Functional cookies help to perform certain functionalities like sharing the content of the website on social media platforms, collect feedbacks, and other third-party features.
Performance
Performance cookies are used to understand and analyze the key performance indexes of the website which helps in delivering a better user experience for the visitors.
Analytics
Analytical cookies are used to understand how visitors interact with the website. These cookies help provide information on metrics the number of visitors, bounce rate, traffic source, etc.
Advertisement
Advertisement cookies are used to provide visitors with relevant ads and marketing campaigns. These cookies track visitors across websites and collect information to provide customized ads.
Others
Other uncategorized cookies are those that are being analyzed and have not been classified into a category as yet.
SAVE & ACCEPT